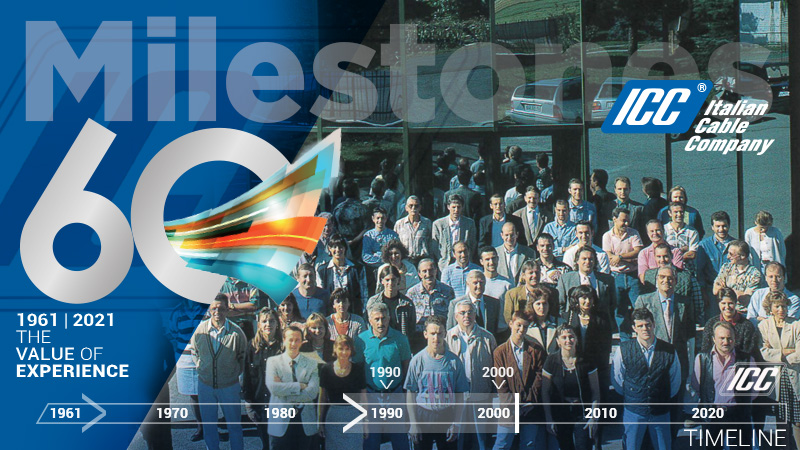 The 1990s were stormy years in Italy: the exceptional growth of previous years left room for recession and for the progressive loss of competitiveness of large companies.

On the other side, the small-medium companies born in the Seventies and Eighties, such as Rota Cavi, were the drivers of the Italian economy, standing out for their innovation and spirit of initiative.
In this scenario, the Nineties were rich in great changes for Rota Cavi.

In 1994 the company acquired La Tuste, a factory producing electric cables, which had inspired Giuseppe Rota to approach the world of cables many years before.

The third generation of the Rota family joined the company and set up an internationalization strategy that aimed to expand business beyond the Italian borders.

The initiative, the strong desire to grow and the teamwork of the Rota family led to the first successes of the new strategy: for the first time, more than 30% of the turnover came from abroad.

Rota Hellas was founded in Greece and partnerships were established with important companies in Germany and Russia.
Following these developments, the company felt the need to identify itself with a company name that reflected the new corporate vision. In 2001, Rota Cavi S.p.A took its current name Italian Cable Company S.p.A. (I.C.C.), conveying the desire to acquire an international dimension while maintaining the high quality level of Made in Italy.

On the left: the founder – Giuseppe Rota
On the right: Rota brothers – Luigi, Enrico, Bruno, Ottavio

With 30,000 square metres of production area, 200 employees and a turnover of 51 million Euros, I.C.C. would soon inaugurate a season of investments, through joint ventures and acquisitions and a continuous increase of business volumes on foreign markets.

Follow the next episode of our History to find out!

Did not find what you are looking for?

No problem: we will find it! Fill out the form and we will reply quickly.